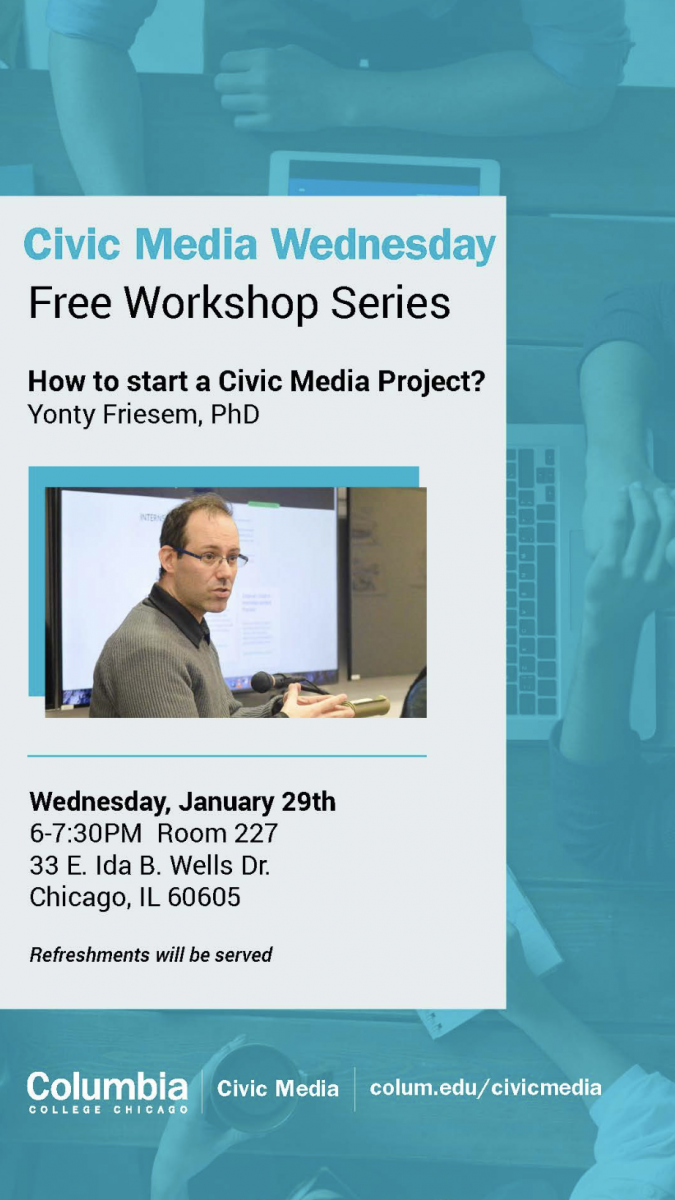 More than twenty years ago, a sophomore named Yonty Friesem at Camera Obscura School for the Arts in Tel Aviv, Israel, was feeling pessimistic. In the midst of bus bombings, missile threats, and daily violence, he had joined a team using media production to facilitate cooperation between Jewish and Arab middle schoolers. Friesem remembers that this “didn’t make any sense to me as a twenty-year-old. [I thought], how the heck are they going to talk to each other when they’re basically enemies?”

He was prepared for disaster. But instead, the opposite happened. Through the process of teaching media production skills, Friesem began to witness Arab and Jewish children working collaboratively and creating partnerships. He said, “I was amazed, surprised, and found that there is something about media production that brings people together.” Now, as an assistant professor in the Communication Department, director of the MA in Civic Media, and associate director at the Media Education Lab, Friesem is ready to do it again.

Friesem, together with five colleagues, is one of nine 2019-2020 Academic Diversity, Equity, and Inclusion Programming Grant awardees for the upcoming Civic Media Workshop Series. The series encompasses ten Wednesday evening workshops for the upcoming semester. It features a combination of institutional guest lecturers and community organizers who will teach students how to use media production in order to solve problems facing communities in Pilsen, Woodlawn, Halsted, Austin, West Garfield Park, and Rogers Park. The best part: the community representatives get to choose the problems to tackle.

For Friesem, the challenge is two-fold: first, he wants the series to bring people together and diffuse polarization, often difficult in an era when corporations have taken control of new media platforms. Most importantly, though, he strives to establish an environment that is truly sustainable and immersive. He says, “the sustainability of a project is a core value. We want [these] communities to understand that we’re not coming in in a patronizing way but figuring out together and brainstorming collaboratively what tools that can be valuable for the community members.”

Community will indeed be key: the first half of the workshop series will be open to the public and feature experts in various fields seeking to answer critical “how” questions: how do you inspire civic engagement? How do you design for a diverse audience? How do you assess a civic media project? By the end of those workshops, attendees should have concrete answers to those questions and action plans for how to move forward in their own projects. For the students and prospective students that attend the rest of the Civic Media course on Wednesday evenings, the instruction goes deeper and becomes more theoretical. It will also include concrete plans for addressing problems identified by communities in partnership with the program.

For Friesem, diversity, equity, and inclusion are at the heart of creative opportunities for managing sustainable community partnerships. And he hopes that this civic media journey will spark a new interest for his students in learning about difference. As he says, they need to listen: “it’s more than just hearing what people are saying…it’s moving beyond bias and rechanneling so that you can work with people who think a little differently than you.”

To attend the workshop please RSVP to this email: CivicMedia@office365.colum.edu

The application date for the Civic Media MA program is March 2. Students interested in enrolling should contact Kelly Schmader at keschmader@colum.edu.